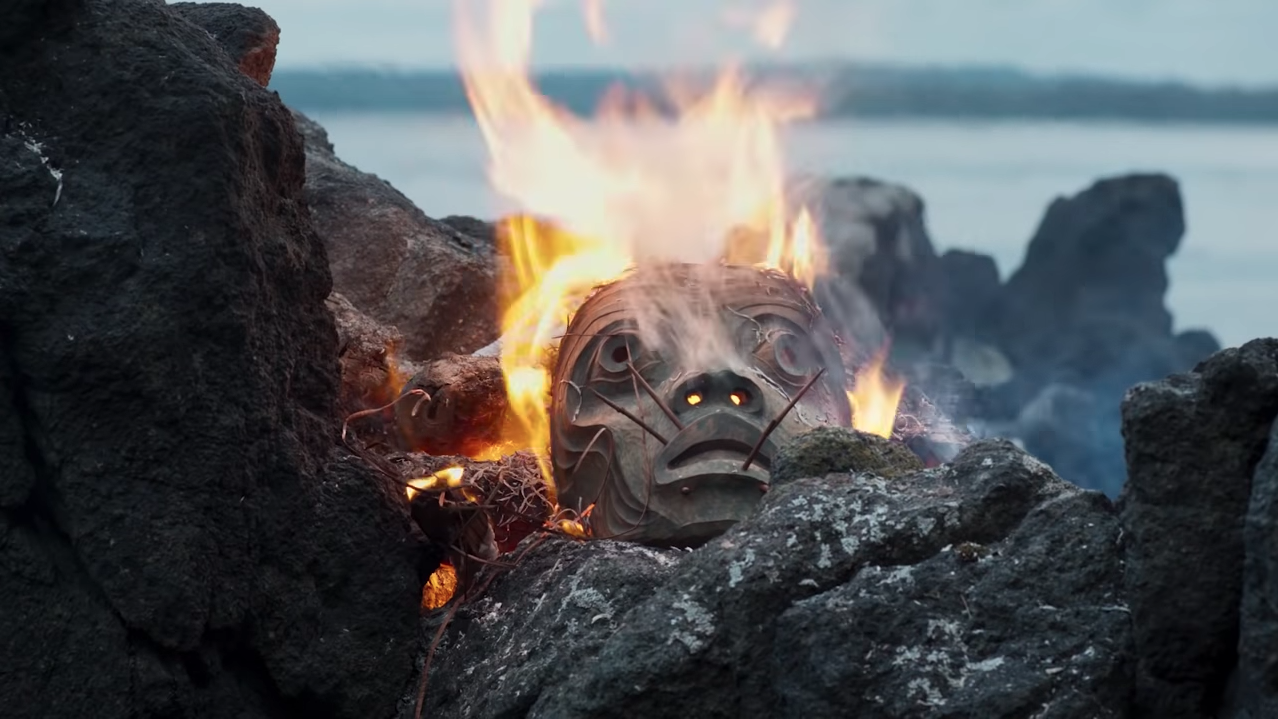 Such is SGaawaay K’uuna (Edge of the Knife), the first movie filmed entirely in X̱aad kil and X̱aayda Kil, dialects of the Haida language. It premiered September 1st on Haida Gwaii. That’s the archipelago off the coast of British Columbia and Alaska that’s home to the Haida people, including 20 who speak Haida fluently. It’s also the film’s setting, and the location of the shoot.

Co-director Gwaai Edenshaw says Haida are the film’s primary audience. “If the Toronto Sun says they don’t like it, I can live with that. But if [my aunt] is coming at me, well then I’ll be running scared,” he says.

A week after the local premiere, SGaawaay K’uuna had its festival debut at the Toronto International Film Festival, where it was nominated for Best Canadian Feature Film. At the Vancouver International Film Festival it won Best British Columbia Film, Best Canadian Feature Film, and was the audience’s pick for Most Popular Canadian Film. It was also nominated for the Vancouver Film Critics Circle award.

Elders Re-Learn Their Language For Rehearsals

One of the film’s actors, 73 year old Sphenia Jones, hadn’t spoken the language since she was a teenager, until production began. She and others underwent coaching to learn or re-learn the unique sounds of Haida, a language isolate unlike any other on earth.

“It feels so good,” said Jones. “Mainly because I can say it out loud without being afraid.”

Jones is the survivor of Canadian residential schools, where colonizers pulled out her fingernails for speaking Haida instead of English. The film is, in part, an effort to counter such forcible assimilation, and a statement of reclamation.

“The secrets of who we are are wrapped up in our language,” says Edenshaw, who grew up in an English speaking household but learned some Haida in school. “It’s how we think, how we label our world around us. It’s also a resistance to what was imposed on us.”

Language on a Knife’s Edge

In addition to the 20 speakers on Haida Gwaii, there are an estimated four fluent speakers living in Alaska. According to UNESCO’s definition, that makes Haida an endangered language. UNESCO reports that two thirds of Canada’s 70 some indigenous languages are endangered as well, and many others are vulnerable. But Canada’s indigenous communities tell a more positive story.

“X̱aad kil/X̱aayda Kil (the Haida language) is not extinct and it is not dying,” says Saulteaux-Cree and Métis journalist Emilee Gilpin, Indigenous Affairs Reporter for Canada’s National Observer. “The Haida are using every tool available to cradle the gifts of their fluent speakers, semi-fluent speakers and silent speakers (those who understand, but don’t speak the language), and pass them on to the generations hungry for a culture that has sustained their people since time immemorial.”

Since 1998, Haida elders and teachers have run The Skidegate Haida Immersion Program (SHIP), a series of language courses offered as part-time, full-time, or drop-in classes, as well as an immersive 10 day summer retreat meant to turn residential schooling on its head.

The University of Alaska Southeast in Juneau offers Haida language classes as well. They remind students that studying a language means learning to see the world in a new way. The Haida language reflects a worldview deeply enmeshed in the region. “These ways of seeing the world developed over thousands of years in specific places, so it makes sense to study those knowledge systems on the lands on which they developed and see how they apply today,” says X̱’unei, Associate Professor of Alaska Native Languages, who is from the Haida, Tlingit, and Yupik nations.

Still, every fluent elder who passes is a treasure lost. UNESCO is calling 2019 the “International Year of Indigenous Languages”, in recognition of the important cultural role these languages play.

‘A Chance to Be Telling Our Own Story’

“We had to rely heavily upon the elders for the translation,” Edenshaw noted. “We wrote it in English.” He directed the film alongside Tsilhqot’in filmmaker Helen Haig-Brown. They partnered with with Inuk producer Zacharias Kunuk, who previously released 2001’s Inuit epic Atanarjuat: The Fast Runner, the first feature filmed entirely in the Inuktitut language.

Kunuk is a residential school survivor turned indigenous filmmaker. He and SGaawaay K’uuna co-producer Jonathan Frantz run Kingulliit Productions, a studio dedicated to “producing independent Inuktitut-language films and TV from the Inuit point of view, while recognizing the importance of new media and innovative technologies”.

“It’s not outsiders coming in and telling our story,” said Edenshaw. “It’ll be a chance for us to be telling our own story.”

The film’s C$1.8 million budget was funded in part by the Canadian Media Fund, the Haida First Nation, and the councils of the Skidegate and Old Masset bands.

SGaawaay K’uuna tells the story of a nobleman who, after being implicated in a tragic accident, flees into the forest and becomes a wild Gaagiixid spirit. This month the film will see a wider release to UK audiences at the Canada Now film festival, April 24th to 28th at the Curzon Soho in London. Watch the downright haunting trailer below.

Comments Off on Only 24 People On Earth Will Understand This Movie. Are You One of Them? 894