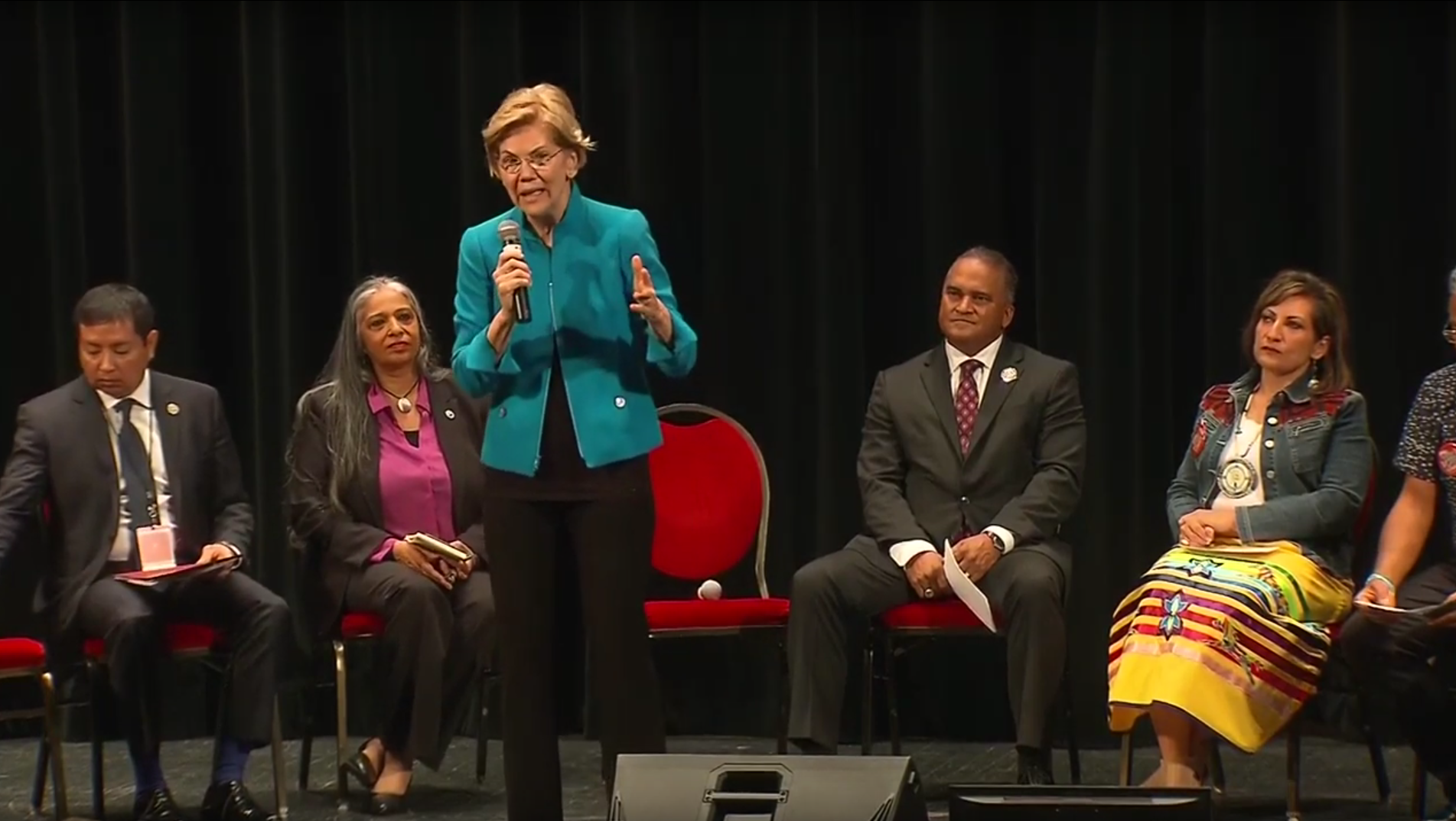 Senator Elizabeth Warren’s voice was shakey as she took the stage before the first ever Native American Presidential Forum in Sioux City, Iowa last week.

“I want to say this,” she began. “Like anyone who’s been honest with themselves, I know that I have made mistakes.” She was referring, presumably, to a long history of claiming Cherokee identity based only on a family rumor, which lead to her taking a DNA test to win a spat with President Trump. The spat stoked anti-Indigenous racism on both the right and the left, undermined the sovereignty of Native Nations, and put real Natives in the crossfire to catch all the damage.

“I am sorry for harm I have caused,” Warren went on. “I have listened and I have learned a lot. And I am grateful for the many conversations that we have had together. It is a great honor to be able to partner with Indian Country. That’s what I’ve tried to do as a senator, and that’s what I promise I will do as president of the United States of America.”

Democratic Candidates Are Courting the Native Vote This Year

Natives are a demographic minority expected to bring around a million votes to the 2020 presidential election, and “overwhelmingly support democrats”. Indigenous issues have re-entered the American conversation since Standing Rock, and the fact that there is now a Native American Presidential Forum shows our voices are increasingly sought after, though we are a small minority.

Warren’s apology was an important step in winning the support of Native voters. Many Natives and allies who admire her policies abandoned their support after the Cherokee identity fiasco, and Warren’s long silence thereafter. But was her apology enough? Not everyone thinks so.

Warren said she learned, but she didn’t say what. She said she made mistakes, but she didn’t say what they were. And she still hasn’t publicly explained to her non-Native base why her actions have been so damaging, and what non-Natives should be doing instead of what she did. Neither has she passed the mic to actual Cherokees or Natives otherwise to speak out on her platform about the damage their communities have suffered because of her theatrics.

How sorry can she really be, if she’s not undertaking the work of correcting her mistakes?

Cherokee writer Joseph Pierce said Warren “needs to sit down with Cherokee people, rather than putting the discussion off for another day.” He calls her public apology “woefully inadequate” for its omission of specifics, and for the lack of reconciliatory action behind it. “She is not our relative,” he writes, “but she can be in good relations with us. That must begin with humility. She must ask how she can better relate to the Cherokees. Instead, right now, she is presuming that she has already done so.”

Rebecca Nagle, another Cherokee writer, who has been an outspoken critic of Warren since this began, says the problem “is not one white woman who claimed to be Cherokee. It is the hundreds of thousands of white people claiming to be Cherokee and the broad social acceptance that emboldens them.” Nagle uses the term ‘white’ here presumably as shorthand for ‘non-Native white,’ because there are in fact Natives of all races and colors. Nagle even clarifies later that Cherokee is a political status, not a racial one, as hate groups like the alt-right would have people believing. But that’s another conversation.

“In the last U.S. census, there were more white people claiming to be Cherokee than there are Cherokee citizens enrolled in our tribes,” Nagle expounds, stating that Warren is only the most prominent example of the familiar cliche: a non-Native white with a ‘Cherokee great-grandma’ blood myth. Natives encounter this so often it would be hilarious if it wasn’t such a constant headache, especially for real Cherokees. One wonders, incidentally, why it’s always the Cherokee who are the target, and not any of the 600 some odd other Indigenous nations? But that’s another conversation too.

Nagle tweeted a thread of just what exactly she’d be satisfied to hear from Warren.

Native Voices From the Other Side, Accepting Warren’s Apology and Supporting Her Native Platform

Others find Warrens apology satisfactory as it is. Former attorney and member of the Blackfeet Nation Gyasi Ross, who now hosts the podcast Breakdances With Wolves, called Warren’s apology “a necessary gesture for a lot of Native people to take her seriously,” and told MSNBC he’s satisfied with it. “For my personal purposes,” he said, “it was sufficient.” He acknowledged that it might not be enough for other Native voters, and that “that’s perfectly reasonable.”

Ross previously criticized Warren, saying “she wants to be an ally, but she doesn’t want to be an accomplice,” noting Warren’s willingness to use Native people as “political fodder” for her campaign.

Now, however, Ross is calling Warren’s Native platform “probably the greatest platform that any presidential candidate has ever unveiled for Native people.” He says it transcends the Native platform from Obama’s 2008 campaign, which Ross says he worked on.

Warren’s platform calls for fully funding Native healthcare, education, and communication (like wifi access on reservations). It proposes a cabinet-level officer to work with Native affairs, and introduces support for Missing and Murdered Indigenous Women (MMIW) by addressing the legal loopholes that leave Indigenous women vulnerable to non-Native predatory assaults without recourse.

When the Damage is Real, Good Intentions Aren’t Enough

For anyone wondering about what’s at stake, here’s an example of the kind of harm Warrenesque shenanigans can cause. The Washington Post recently ran an article claiming that the “majority of Native Americans still aren’t offended by the name of the Washington Red*****.” But it wasn’t true. The Native American Journalists Association (NAJA) pointed out that this finding was based on shoddy research, which only surveyed people who “self-identified as Native Americans”. No tribal affiliation. No cultural connection. In other words, non-Native whites with a blood myth. So in short, the Washington Post got a bunch of non-Native whites to say ‘I’m part Native and I’m not offended’, and called it scientific fact.

NAJA demanded the Washington Post retract the article, create an internal policy for ethical reporting, and send the editors to cultural competency training. But the damage is already done. The Washington Post has empowered bigots with a talking point, no matter how inaccurate, to fuel their anti-Indigenous racism. Non-Native whites have shouted down real Natives on our own issues, so we continue to be made into racist mascots that have harmful psychological effects on our children. Warren didn’t do this. But this is the kind of damage people with fake Cherokee identities, like Warren’s, are doing all the time.

Perhaps Warren will step up and take action for Native people. Maybe she’ll listen to Indigenous nations, or come out with a more robust attempt at accountability. Her platform could make great strides. But these are maybes. Sometimes getting up on stage and saying “I’ve learned” isn’t enough, no matter how well intentioned.

Comments Off on Elizabeth Warren Has Apologized For Harming Native Communities, But Is It Enough? 602

After 200 Years, the Cherokee Nation is Getting Their Treaty-Guaranteed Delegate in Congress » 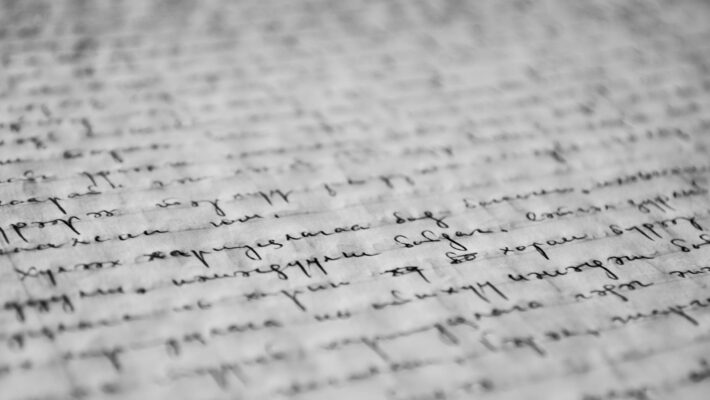